I've been trying to do the Art Bead Scene Blog's Monthly Challenge each month (and managing about every other month).  The challenge is to create a piece inspired by a piece of art using at least one art bead.  This month, I used the beads of 3 different artists.  Here's information about this month's challenge: 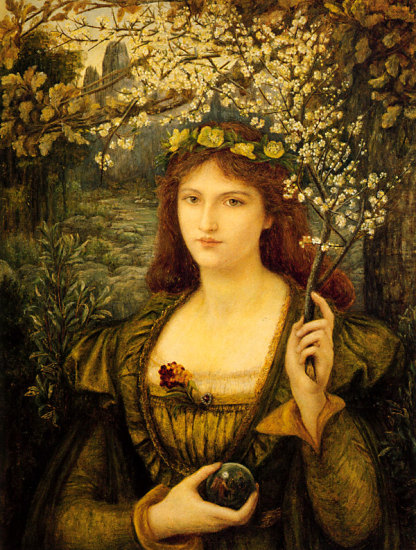 About the Art
Given to the Walker Art Gallery on behalf of subscribers, by Harold Rathbone.
The woman is a character from the Italian poet Dante. She was described as a heartless lady dressed in green. In her hand she holds a crystal bowl reflecting the figures of Love and Dante.
This type of painting, a half length femme fatale in Renaissance costume, was initiated by Rossetti and imitated by many others. The artist of this picture knew Rossetti. She modelled for one of the handmaidens in Rossetti's painting 'Dante's Dream' (Walker Art Gallery).

About the Artist
Marie Spartali was born in Middlesex in 1843, daughter of Michael Spartali, import-export merchant and sometime Greek consul in London, and by birth and acquaintance like Maria Zambaco (mistress of Edward Burne-Jones) a member of the cultured Greek community in London whose doyen was Constantine Ionides. From 1864-70 she trained under Ford Madox Brown, alongside his daughters Catherine and Lucy.
She was a noted 'stunner' (the Pre-Raphaelite slang for a good-looking woman) and sat for Rossetti and Burne-Jones as well as the photographer Julia Margaret Cameron. In 1871 she married against her family's wish the American journalist and amateur artist W.J. Stillman; they had three children, one of whom died in infancy. Owing to her husband's work as a newspaper correspondent the family settled in Florence in 1878, and then Rome until 1898. Despite prolonged residences abroad, Spartali became a regular contributor to Grosvenor Gallery from 1877 until 1887, and its sucessor - the New Gallery - as well as at various venues in eastern USA.
Her sustained output proves her professionalism, but little of her work seems to have sold. Her favoured subjects were literary-historical figure groups and decorative female heads preferred by patrons; landsapes and flower pieces are equally representative though less distinctive. Many of her works draw on Italian literary themes, especially Dante and Boccaccio as well as depicting Italian landscape.
Her daughter Euphrosyne (Effie) became an artist, as did her step-daughter Lisa Stillman; her son Michael was an architect and settled in America, where retrospective shows were held in 1908 and 1982.
She died in Britain in 1927. 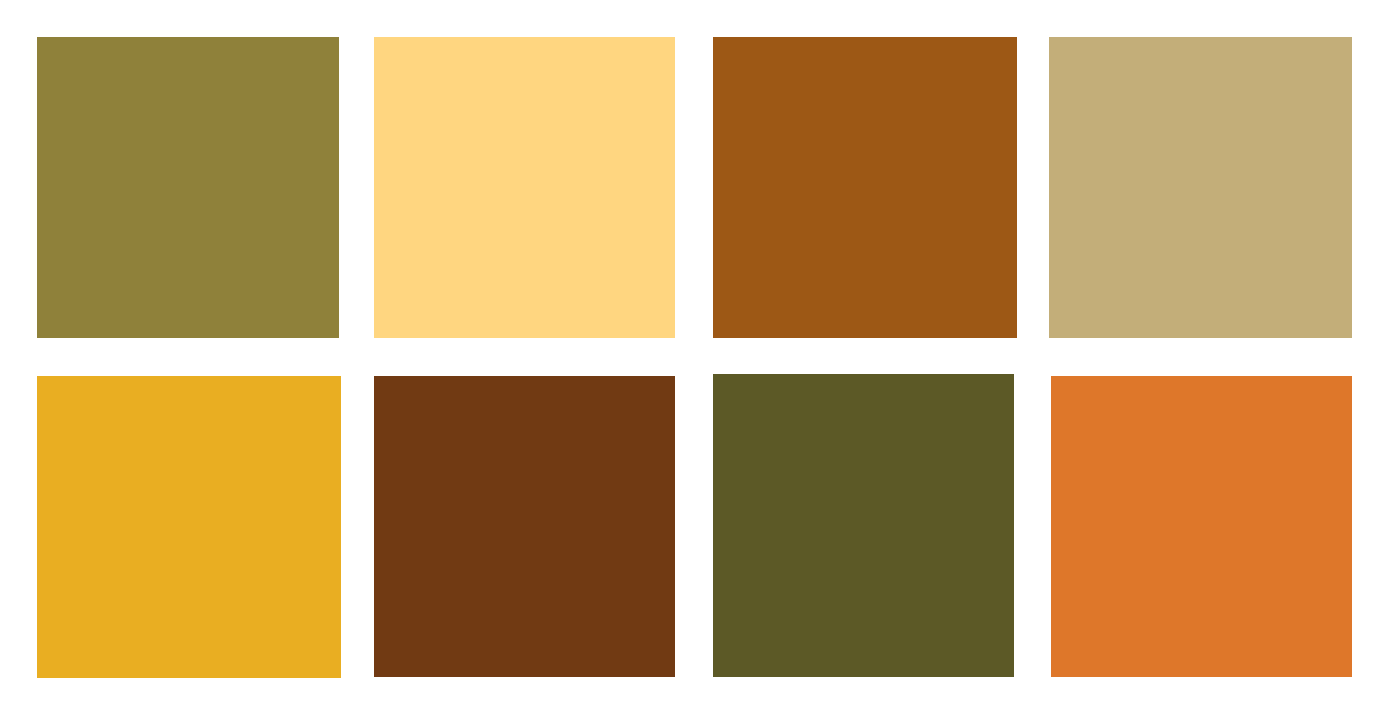 The Prizes:
A winner will be randomly chosen from all the qualifying entries on December 1st.

Our sponsors this month are Hint Jewelry and Mary Harding Jewelry.


Anything connected to the PreRaphaelites is right up my alley!  I was an Art History major in college and the PreRaphs were always a favorite topic.  I still devour every book, show, and film about this period of time (no matter how much artistic license is taken). 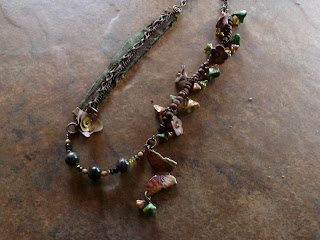 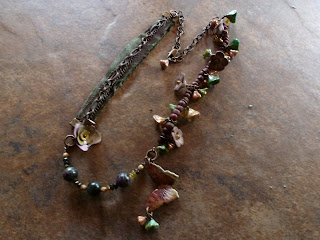 The arch of flowers and the fabric of the subject's dress inspired this piece.  The Chrysocolla looks like the round stone the subject is holding in her hand and the dipioni silk ribbon reminds me of her shimmering dress.  While there is no butterfly in the original painting, it was not difficult for me to imagine one fluttering around her head.

Let's see if I can make it 2 months in a row for the ABS Challenge.

Lisa Cone - Inspired Adornments
Who am I? Many things these days. Business Owner (x2), Dog walker/pet sitter, jewelry maker, gardner, curator, wife, cancer survivor, Put Lover, Cat Collector...I mix work (pet sitting) with my other interests: making jewelry, urban gardening, curating art, seeing live music, friends, food and, of course, my bevy of creatures (both permanent residences and my fosters). My blogs are about those things - the ones that fulfill my life.